Bocce with the Bar 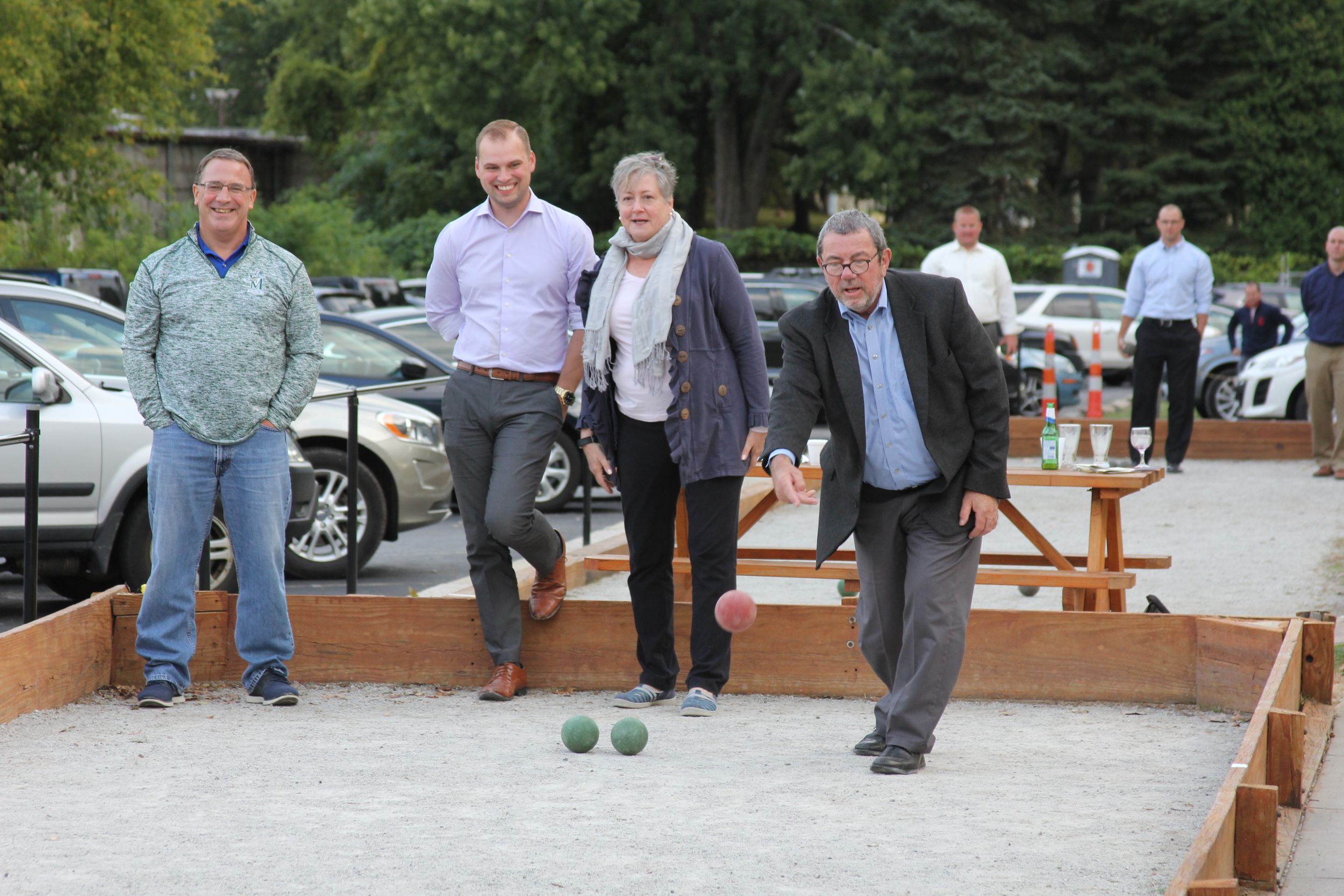 Bocce With the Bar - Team Registration

This registration page is ONLY for TEAM REGISTRATION, which is limited to 16 teams. Only the Team Captain is required to complete the registration process for your team, yet the Akron Bar can accept separate payments.  At the time of registration, if you do not have a complete roster, you may enter players at a later date by contacting the Akron Bar's Membership Director. Teams will receive five (5) meal tickets, which will be available at the registration table.

Bocce is played with eight large balls and one smaller target ball, which is called a "pallino."  There are four balls per team and they are made of a different color or pattern to distinguish the balls of one team from those of the other team.

On four (4) player teams two (2) players from each team are at each end of the court.  A game begins with the toss of a coin.  The team that wins the coin toss can choose to either have first toss of the pallino or the color of the balls they will use.  To start a game, the pallino is rolled or tossed underhand by a member of the team having won the coin toss to the opposite end of the playing court.  The pallino must go past half court but not past the throw line of the opposite side of the court (between the 1st and 3rd white markings).

If a team commits a foul while throwing the pallino (pallino not between designated white markings) the other team throws out the pallino and the team that originally started the frame will throw out the first ball.  The pallino is now your target.

Once the pallino is in position, the first team throws their bocce ball.  The player who threw the pallino also throws the first ball from behind the throw line (1st white mark on the side boards) - attempting to get as close as possible to the pallino.  You may throw from anywhere behind the throw line.  If at any time the pallino is hit and moves, where ever it stops is the new target.  You may use the sideboards in making your shot but if you hit the back wall, without hitting a sidewall or another ball first, it is considered a dead ball and your ball is removed from play.  The player for the opposing team throws their first ball trying to get their ball closet to the pallino.  The "nearest ball" rule governs the sequence of thrown balls.  So the team farthest from the pallino continues to throw its balls until they are closest to the pallino or run out of balls to throw.  Whenever a team gets its ball closest to the pallino they step aside and allow the other team to throw.  Any player may call for a measurement to determine which balls are closer at any time within reason.

After both teams have exhausted all their balls, that game is over and points are tallied.  In each game, only one-team scores points.  Points are awarded for the team having its ball(s) closest to the pallino at the end of each game. 1 - 4 points are possible.  So if your team has 1 ball closer to the pallino than your opponent you score 1 point.  If you have two balls closer than your opponent you score 2 points, 3 closer is 3 points, and 4 closer is 4 closer is 4 points.

The team that was awarded points in the previous game begins the next game by tossing the pallino into play. If a player rolls a ball of the wrong color it will be replaced by a ball of the correct color. At the end of each game, players switch to the opposite end of the court to begin the next frame. The team with the most wins out of three games wins the MATCH. This is a single-elimination tournament - the courts are lit so the games will continue until a champion is determined. You have 10 minutes to arrive for your game. If you do not arrive on time, you forfeit, and show good sportsmanship!

Proceeds benefit the Akron Bar Foundation and its support of local legal charities.